From 1899 until 1901, my Great-Grandfather Paul Jaeschke served as the 2nd governor of the Kiaotschou, the short-lived german colony in China’s Shandong providence, now better known for its most important city, the 7m Olympic venue Qingdao, and for being the origin of the famous Tsingtao beer brand. After two years, Jaeschke, whose youngest daughter from first marriage, Editha, was to be my maternal grandmother, died from typhoid fever. During his short tenure, he imported a prefab wooden house from Germany, as well as a young girl from the german city Kiel, a childhood friend of his eldest son, to be his second wife. 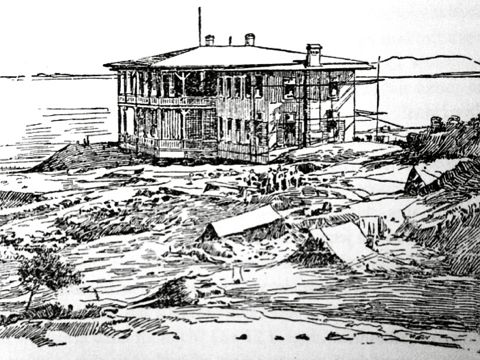 For probably more dubious achievements, he also took part in the crushing of the 1900 Boxer uprising. The Chinese paid back for this (and Jaeschke’s generally not very favorable, prejudiced view of their people) by demolishing his and his fellow countrymen’s tombstones from the international cemetery during Cultural Revolution. Just recently remains of some of these tombstones have been found lining a ditch in a local Qingdao park.