Half a year after my memento for Daevid Allen, founder of Gong, it’s time for a little follow-up about that enchanting figure whom I take to be one of the proper re-incarnations of legendary Merlin, the shapeshifter:

When Q and I went to Mallorca for an Easter holiday two years ago, we also went to the estate of the poet Robert Ranke-Graves in Deya, now a museum. We were the only visitors. On the premises, we were most cordially greeted by a distinguished gentleman who turned out to be William Graves, Robert’s son: 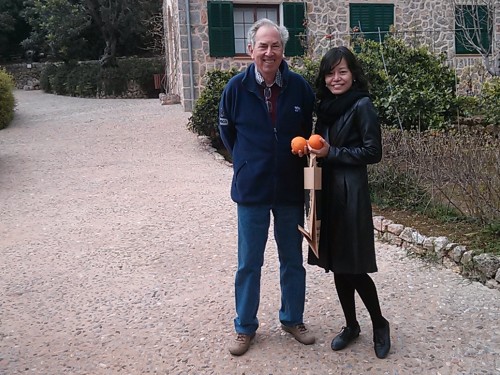 William kindly offered to show us around. I asked him about his father being a gravitational centre for the hippie movement during the late 60s and 70s, many of those people coming to and actually staying and living in Deya. He frowned and replied, “Oh yes, that was actually a bit too much for us sometimes…”.

It was mostly Ranke-Graves’ book The White Goddess, the ‘Historical Grammar of Poetic Myth’, that inadvertently made him a guru of the scene. Among the first (and probably most influential) guests were Daevid Allen and Gilli Smyth, of Gong fame, who first came to Deya in the year of 1968, after they had participated in the May ’68 uprisings in Paris.

Even though Daevid Allen – in best pacifist hippie style – is said to have handed out teddy bears to the police in Paris, they’d been branded ‘cultural agitators’ by the authorities and had to leave France in a hurry. They came to Deya and were not allowed back into France until 1971, when they started to establish Gong and its plentiful derivatives as a cornerstone of french (and british) counterculture, a kind-of-success story that lasted, on and off, until Allen’s death this year.

Here are two examples of Allen’s (and Smyth’s) spectacular work from that early time, both recorded in France before they left for Mallorca. First, Allen solo with his guitar(s):