Some notable events from the last days: One day after my arrival in China I was taken along to a poetry reading in some subterranean Beijing bar. Not exactly what you call a poetry slam, but also based on participation. The MC dragged me onto the stage, and as I didn’t have any poems of my own to present, nor brought along any Hölderlin, Rilke, Grünbein or other german cultural heritage, I read Q’s english translation of her Venice poem. I was so nervous that I forgot a good part of the last verse, but it didn’t really matter because there was probably nobody who understood enough english anyway and she provided the chinese original afterwards.

Two days later I was witness (always painfully conspicuous as a foreigner) to the year-end meeting of Sohu’s featured bloggers. All the big chinese portal providers also serve as blog hosters, some with millions of bloggers each. Most of the active bloggers in China have several blogs, hoping to be featured here and there by their hosts on the portal homepages, an instant guarantee for thousands of additional pageviews and a lot of face. So in most cases the different blogs are not filled with different entries, but the contributions are simply copied and pasted to the different blogs.

Many ‘independent’ bloggers (meaning, bloggers without affiliations to some existing brand) look down upon this type of attention-seeking. Their contempt goes so far that some of them use a different word for blog: 网志 wǎng zhì (“net footnotes”) instead of 博客 bó kè (which, tellingly, means something like “winning guests”). 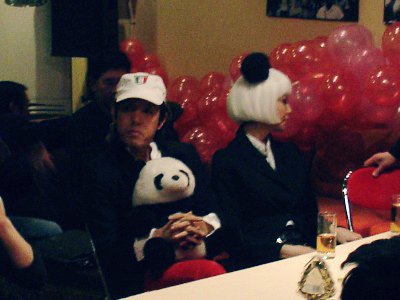 But real bloggers or not, it was fun. Conceptual artist Zhao Bandi, accompanied as always by his trademark stuffed Panda, participated and was the object of much attention. There was a lively discussion about the most significant events of the last year and even some semi-serious breast-beating for not being more courageous in face of the usual attempts to ‘regulate’ the chinese blogosphere. Some self-declared poets bickered with the attending news bloggers about the proper use of words. Finally, a little boy, son of the director of Sohu’s weblog department, entered stage for a saxophone solo and you could see the pride in the eyes of his father holding the score for his talented offspring.