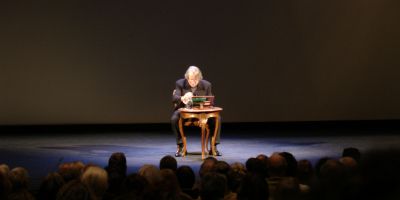 Were I more faithful a blogger, there would have been plenty of opportunity for daily writing. I’ve met a dozen interesting people, had wonderful talks, visited an outstanding international literature festival. And then there was the city itself with its characteristic mixture of pomposity and shabbiness.

Every time you visit Berlin some grandiose new buildings want to make you forget that there is no real money being made in this place. Unter den Linden politicians’ motorcades pass by with flashing blue lights. Even at eight o’clock in the morning Café Einstein is packed with high-ranking officials and eager lobbyists. The smell of power is spread over Berlin-Mitte.

But then, public transport still has its usual bunch of defiant dreamers: There’s the withered femme-fatale-who’s-never-been in her chrome-buttoned waisted leather jacket, tight jeans and high heel boots. The slightly overweight, unemployed Neukölln samurai wearing ponytail and some imitation of coolness on his unshaven face reads Marc Aurel. An adolescent black boy in a shiny white suit with dark blue silk shirt and polished shoes, still full of illusions, nevertheless knows how to keep distance from the turkish hoodlums. And the hollow junkie averages 50 cent an hour pestering the passengers with his whining soliloquy.

Berlin’s appeal, which made me willingly suffer the hardships of bumpy hitchhike rides through communist territory whenever I had the opportunity as a schoolboy, is still effective. The Prussian grandeur of its design, the proletarian charm, creativity and grumpy wit of the locals, the many temptations of state-sponsored High Culture. How could one not fall for this place.