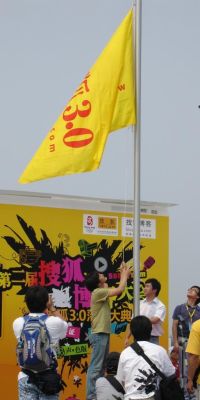 Hot, dusty, the sun an orange ball at the yellow-greyish sky. Q’s apartment is situated in an old-fashioned compound near Qinghua University in the Northwest of the city. So for the first time Chaoyang district is not the base of my stay. But here, too, long noses are numerous, because of the different universities in the quarter.

Zhang Chaoyang, CEO of Sohu.com and with his 43 years one of the richest mainland chinese (his given name is the same as the name of the park and district, suitingly), enters stage in washed-out jeans and t-shirt. He pays homage to the people responsible for the project and then raises the Sohu3.0 flag. Even though no stranger to the celebrity parcours he comes across as shy and a little lost. The atmosphere is peaceful, the omnipresent security appearing harmless rather than daunting.

My old friend Sabine Hieronymus, a sinologist from Heidelberg, stops by on her way back from a conference on the occasion of the 100th anniversary of the death of her heroine Qiu Jin. That’s Beijing: On the first afternoon more social encounters than in a whole month in Frankfurt.